I'm really sorry it's been so long since my last post.  I'll come out with the truth- I need a new computer.  The last few posts have lost my photos, and have been so frustrating to try and finish, I just needed a break. I didn't realize it had been so long since I last posted!!  I still haven't replaced my computer....  You, my readers, deserve better!


What has been going on with me, you ask?  Or maybe not.... Are you still even out there reading this?

Well, this year- next week, actually- my big brother will be getting married!!  I was asked to be a bridesmaid, and am thrilled at how flattering the dress is.  I can even wear my normal bra with it (with a small amount of alterations).  All that has been really exciting.  As a bachelorette gift for my future sister-in-law, I went into the yet-uncharted-by-me territory of corsets.  I was pleasantly surprised with the cost & quality of what I bought from Corset Story.  I'm rather jealous that she owns it now!  I want one for myself- I'll add that to my wishlist!

I did a few months at a water aerobics class with a pregnant friend of mine (who has since given birth to the sweetest little peanut, Ashley!), and for that, I bought a tankini from Panache- the Tao Tankini which has been discontinued in many places.  I wish I would have gotten a one piece for the class.  With all the jumping & bouncing in the water, the tankini kept sliding up!  But I do have to say that I felt very supported! The center gore of the tankini was quite high & my sternum wasn't a fan!  But I really like the quasi-camouflage pattern- it hid my little tummy quite nicely.

The website Wellfitting has launched. It's a site for those of us in the USA to buy Comexim bras with US shipping! No more shipping from Poland!  Yay!  And Julia Szopa and her sister have done such a great job with it!!  I still have yet to order from them, but that is more of a monetary issue than not wanting to shop with them (once that can of worms is open....!!)  Comexim has really beautiful bras & they are well constructed.  I suggest giving them a try & am so happy that Julia & Co have made it a lot easier for us Stateside girls to have easier access!

Finally, I have been waiting in anticipation for the Curvy Kate Strapless bra!  It will be coming out in September, and early reports are that it is pretty fabulous!  Sometimes, CK can be a little wide in the wires & a little high in the underarm for me, but as I currently don't own a well fitting strapless, I'm hoping that the CK strapless is what I've been missing in my life!

I hope you have been doing well, readers!

The next guest blog post comes from Jessi.  She's long suffered from fittings that were just plain WRONG about her size.  She is finally taking matters into her own hands.
"38 DD! Oh my god you're going to topple over!"
That was my first ever experience being sized in a department store. The elderly Macy's employee loosely took a bunch of measurements, came up with that size and loudly exclaimed it for the whole store to hear. Heads turned and looked in my direction. It was humiliating. I was about 13, then.
When I was 17, I became pregnant with my first child, and my breasts jumped up in size. Motherhood Maternity, not wanting to miss out on a sale, decided I was probably a 40E. Some friends dubbed me "Jess-E."  You see - I've always been the girl "with the boobs." They've taken on an identity of their own, and people have always just affiliated me with them. You name it, I'm certain someone has said it or called me it. "Sugar tits?" Check. "Breastica?" Been there, called that. "You have the biggest boobs I have ever seen!" Cool, I hear that several times a day!And of course, the abundant "What are you? Like a DD?!" The real answer to that question?  Despite the girls having a life all their own, I still have absolutely no clue what size I am, or what brands work.
I very recently finally realized that I should not have to push my breast tissue back into my rib cage to force my breasts into my cups without spilling over the top, and started seeking other options. Until that point, I had been forcing myself into 40G's from Cacique by Lane Bryant, which gave me quad boob and rode up my back all at once. I was recently introduced to a group known as "Bravolution" on Facebook, and got a lot of sizing and fit advice. I measured myself and assumed I was probably somewhere near a 38J, and I know that the area where the center gore of a bra should sit on me is quite narrow, so I ordered a panache Ariza, and in a 38K to be safe. The cups were too small, the band was swimming on me, and the wires stabbed horribly into my arm pits. No go on that! I got a killer deal on a Curvy Kate Lottie in a 36JJ, so I purchased it. The cups flattened the tops of my breasts, thus making them have a football like shape. Hilarious, but clearly the wrong size. I ordered a Parfait by Affinitas Sophia in a 36K, the band is huge on me, and the cups are too small, and also too shallow in the bottom.
I've decided I need to go into a 34 band, because everything else just ramps up my back after a wear or so. Some people have told me that this could be because of tissue migrating. Who knows, at this point! I refuse to just give up knowing that I am so close, though. I am planning on ordering some Ewa Michalak and will update you all on how it goes, so stay tuned for my fitting misadventures!
Here are some pictures of Jessi's trial & errors: 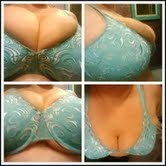 I'm hoping to continue with updates from Jessi as she goes through her bra fitting transition.  The problem with not finding what fits you in a store is that you have to online shop.  Don't get me wrong- online shopping is great.  You get tons of selection you wouldn't otherwise have available.  However, online bra fitting can entail a lot of ordering, sending back, and re-ordering.  It all takes time, and can be frustrating.  There is one place that I know of that does a fit program- for one $45 refundable price, they send you five bras to try:   True & Co  They start at 32 bands, and worth checking out.  Stay tuned for more of Jessi's journey!


Hi all!  I'm excited to get going with my guest blog posts!  Learning from other people's journeys is something that I think is really important in life.  So, onto the first post.  She wishes to remain anonymous. I'm sorry to say that I've been having difficulties getting all the pictures to post, so I'm sending this out without all the photos.  I will keep trying to get them in!  Sorry!

This is me. This is me, October 2012, so approximately a year ago. Seems like a lifetime ago, in some ways.
There has been so much in my life that’s changed it’s difficult to list it all. But the one thing that dominates it all, every change, is me. Myself. I’ve changed.
And that has all started with finding the correct bra size.

In the photo above, I was wearing the very-expensive Ulla Dessous bra I had been wearing for years. Size: 75L. For the UK-sized people: That corresponds to 34H-ish. (side note here: online converters differ in their opinion between G and J, but I believe it’s H or HH for sure). This photo was taken at my graduation, and is looking like what I currently refer to as “sad boobs”. Meaning that my boobs droop down quite a bit.
This was the norm for me, for most of my student years. Because the Ulla Dessous bras cost roughly €100 (around but mostly just above it), this is not something that I was able to buy often. So, I purchased maybe 1 bra per year. Especially when I really outgrew the somewhat-cheaper brands that stopped at European I-cup, couldn’t ignore the quadboob anymore and really needed to move on to K- and L-cups.

I had heard of the English brand Freya, but the one store that had them also sold Ulla Dessous and the bra fitting lady told me “If you’re used to Ulla, you’ll never want Freya. Ulla has much better quality and the same size!” Which, in my ignorance, convinced me to stick to Ulla Dessous.
I remember really well the visit I went there. There was nothing in stock of course because it’s the end of the range, so while I got to try a bra in a sister size she was going to order some bras for me and I’d come back to fit them. Easy said, easy done. I could even choose between 6 or so bras that were available to order in 75L! Imagine my surprise when I finally visited again (delivery took months, I had almost given up on hearing from the store again) it turned out that from the 3 bras I had chosen, the lady had ordered only 1 in 75L! The other two were in 75K. No surprise that they were too small, and in retrospect also the 75L was too small but hey it didn’t quadboob so it fit.

Yes, the only criterion on which I judged bra fit was the (non-)existence of quadboob. Now, looking back, those bras were a horrible fit. Of the 5 bra fitting points (to be found aplenty on the webs), the only one that the bras could tick was the quadboob one. And that one not even fully, because I did not scoop&swoop. Band riding up, gore floating every which way, wires sitting on breast tissue… all there.

The fitters in every store I had visited told me that the band is normal like that, and that the gore like that is normal. That with boobs my size, it’s impossible to get the gore flat like you hear it should be sometimes. So I accepted this as normal. Below, I’ve included pictures of how that looks….